Opening line: Karlbergsvägen 66 in Stockholm is the location of Günter’s, the best hotdog kiosk in Sweden.

Leif G.W Persson is a writer at the absolute top of his game. The Dying Detective is the seventh of his novels to appear in English, and is a gripping, absorbing, beautifully plotted read. Not only does it succeed brilliantly on its own terms, but deftly extends the universe of his previous novels, and, like another of his novels, Linda, pays homage to a giant of the crime genre in a truly inventive way.

The opening of The Dying Detective shows Lars Martin Johansson, a retired Swedish Police Chief, suffer a stroke after a lifetime of unhealthy excess. Readers of earlier Persson novels will remember Johansson as a brilliant investigator with an uncanny ability to ‘see around corners’. Now we find him frustrated by his physical limitations and slow recovery – a sobering depiction of the aftermath of a stroke – and drawn into the investigation of a cold case, the murder of nine-year-old Yasmine Ermegan in 1985. Before long, he has assembled a rag-tag team of old police contacts and lay-experts to help him crack the crime.

From the very beginning, the novel adds an extra level of complexity to the investigation of Yasmine’s case: the challenge for Johansson is not simply identifying the perpetrator, but figuring out what to do if he finds him, for a new statute of limitations means that the killer can’t legally be held to account for his crime. And this is where Persson’s literary homage comes in. Around two-thirds of the way through the novel, Johansson is shown praising Swiss writer Friedrich Dürrenmatt’s Der Richter und sein Henker (The Judge and his Hangman), originally published in 1950. He states that a good book ‘can give you something to think about, and if it’s really good then reading it can even make you a better person. I’ve read this one several times’.

In The Judge and his Hangman, Inspector Bärlach, who is in poor health and at the end of his career, does battle with an old adversary, a man who delights in committing crimes in such a way that the legal system can’t touch him. Bärlach is desperate to bring him to justice, but knows that he’ll have to act unlawfully to do so – a terrible dilemma for a policeman who has upheld the rule of law all his life. The novel stresses the illegality of Old Testament justice, but also the terrible moral consequences of such action for the self-appointed ‘judge’ or ‘hangman’. And that’s not all. A later Dürrenmatt novel, Das Versprechen (The Pledge, 1958), features a policeman who becomes obsessed with the unsolved murder of a young girl, and whose desperate need for justice leads him to act unethically. This clever ‘intertextuality’ is carried off by Persson with a light, expert touch. It’s like watching a jazz musician improvising brilliantly with the main melody of a song.

What a smart and versatile writer Persson is. He pulls off the big ‘state of the nation’ novels (his ‘Story of a Crime’ series) or the more intimate police investigation (Linda, As in the Linda Murder) with ease, creating an expansive universe in which characters move freely from one novel to another. Regular readers will undoubtedly feel rewarded by the appearance of many old friends in The Dying Detective, from Bo Jarnebring and Lisa Mattei to the shortsighted pathologist who bids good morning to the yukka plant in reception. A special word of praise, too, for long-time Persson translator Neil Smith, who does such an excellent job of capturing the author’s voice, and in particular his wry, often black humour.

The Dying Detective has been submitted for the 2017 Petrona Award for Best Scandinavian Crime Novel of the Year. It sets a very high bar!

You can see a list of Petrona Award eligibles over at Euro Crime.

This week’s post, on Icelandic author Arnaldur Indriđason’s The Draining Lake, can be found at the blog Petrona Remembered. It’s still one of my absolute favourites.

A few tasty tidbits as we (finally) make it to the weekend.

1. Spotted on It’s a Crime! (Or a Mystery): the BAFTA TV nominations are out, and the International category includes two series with strong elements of crime – The Bridge and Homeland. They make up half of the nominations (listed below).

The one I want to win…

The full list with all categories is available here (thank you, Rhian!).

2. The Independent foreign fiction prize 2013 shortlist has been announced, and contains one of the crime narratives I highlighted in an earlier post – Gerbrand Bakker’s The Detour (translated from the Dutch by David Colmer / Harvill Secker).

Publisher description: A Dutch woman rents a remote farm in rural Wales after confessing to an affair with one of her students. In Amsterdam, her stunned husband forms a strange partnership with a detective who agrees to help him trace her. They board the ferry to Hull on Christmas Eve. Back on the farm, a young man out walking with his dog injures himself and stays the night, then ends up staying longer. Yet something is deeply wrong. Does he know what he is getting himself into? And what will happen when her husband and the policeman arrive? The Detour is a deeply moving new novel, shot through with longing and the quiet tragedy of everyday lives.

It all sounds rather existential. I’m intrigued! Here’s the full shortlist, which might need further exploration as well.

3. Petrona Award for Best Scandinavian Crime Novel of the Year

I’m getting very excited as crime novels for the 2014 Petrona begin to arrive. Having been away from the university for a while over Easter, I returned to a veritable mountain of packages, and felt like proverbial kid in a sweet shop as I opened them all up. 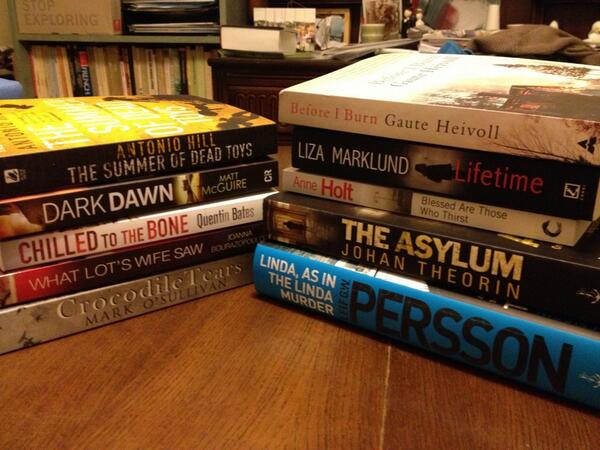 Petronas on the right; other goodies to the left

The winner of the first Petrona Award will be announced at CrimeFest in Bristol (30. May to 2. June). I’ve just booked my ticket and hotel and am looking forward to it all greatly, not least because this will be my first ever visit to the convention. The programme looks very inviting. Perhaps see you there?

This week has seen lots of interesting crime news – a veritable smörgåsbord of delights.

The confirmation that the bones found under a Leicester car park are indeed those of King Richard III, has resulted in some knock-on coverage for Scottish crime writer Josephine Tey’s The Daughter of Time. This 1951 classic tops the Crime Writers’ Association list of 100 best crime novels, and shows Inspector Grant ‘re-open’ the case of ‘the princes in the Tower’ whilst laid up in hospital with a broken leg. Can he really prove that Richard is not the callous murderer that history paints him to be…?

An interesting article in the Canadian Globe and Mail explores the value of the novel’s critique of history, and its assertion that many historical narratives are falsely constructed for political ends. Nikolai Krementsov, professor of the history of science and technology at the University of Toronto, gives it to his students to illustrate the difference between primary and secondary sources, and says ‘I know no book that gives such as clear account of what history is and what its function is in society … It should be mandatory reading for historians, investigative journalists and policemen’.

He also points out that Tey is writing at the beginning of the Cold War, a time of enormous political transition when lots of inconvenient wartime facts were in the process of being forgotten. ‘In that atmosphere, she wrote a definitive account, not of Richard III, but of how history can be manipulated’.

This week saw the birth of a new crime fiction blog, Petrona Remembered,  which has been set up in memory of the wonderful crime blogger Maxine Clarke.

The team behind the site aims ‘to develop a resource for current and future fans of the genre and we want you to help us. We’re asking writers, bloggers, readers, translators and anyone else who loves a crime or mystery novel to send us a submission about that book. It can be a review, a pitch, a love letter, a poem or, a video. Or something else entirely. Each week we’ll post a new submission and, over time, this site will become a jumping off point to a world of much-loved crime fiction’.

I personally like the idea of a crime haiku :). Submissions great and small are welcome, and you can find out more here.

A new annual award, The Petrona, for the best Scandinavian crime novel, is also being established. Maxine was particularly partial to some top-notch Scandi crime, so this feels very fitting.

Last but not least, for those of you suffering withdrawal symptoms from Borgen, help is on the way in the form of Spiral series 4. Parisian Captain Laure Berthaud and her colleagues are back as of tonight for 12 gritty episodes, taking over the BBC4 Saturday evening ‘international slot’ from 9.00pm until 11.00pm.

Further information and a clip from the first episode can be found here.