I’m just back from CrimeFest in Bristol and am floating on a fluffy cloud of contentment after three days of great panels, excellent company and awards bling. Here are some highlights (more will follow).

The Euro Noir panel on Saturday was probably my favourite of the weekend. In a wide-ranging discussion, the authors explored the nineteenth-century origins of European crime fiction during the rise of capitalism (Dominique Manotti), the role of the translator as the voice of the foreign author (Ros Schwarz), the use of Euro Noir to probe the uses and misuses of power (Paul Johnston, Manotti, Jørn Lier Horst), crime writing and journalism (Manotti), the influence of Maj Sjöwall and Per Wahlöö (the Lars Keplers), the low status of crime writing in France (Manotti), the influence of crime dramas such as The Wire on crime fiction (Johnston), and, prompted by an audience question, the relative lack of black European crime writers and protagonists.

What I liked in particular was Manotti’s unapologetic view that crime writing should be used to ‘tell the truth’ about political and social issues – ‘otherwise what’s the point?’. This contrasted with lots of British authors during the weekend, who, when asked about the place of ‘issues’ in their work, took the more or less default position that entertainment came first and the serious stuff second (because the latter ‘puts readers off’). Johnston wondered whether the UK is more conservative when it comes to writing socio-political crime than other European nations, and that’s got me wondering too (although obvious exceptions spring to mind like David Peace’s excellent Red Riding/ Yorkshire Noir quartet. I’m sure there are also others).

Manotti is a crime-writing star in her native France, and if you haven’t yet read her work I would thoroughly recommend it. You can read my review of Affairs of State here.

The panel coincided with the launch of Barry Forshaw’s new book Euro Noir, which provides an excellent road-map to European crime fiction and lots of great reading suggestions, even for those who have already read quite a bit. With my Germanic hat on, I can say that the section on ‘murder in the German-speaking territories’ is impressive – the man really has done his homework.

German crime fiction was predicted to be one of the next big things by the Euro Noir panel. And lo, the shortlist for the CWA International Dagger, announced at CrimeFest on Friday, features a German novel, Simon Urban’s Plan D. Here’s the full list, with further details on the CWA website.

Last, but most definitely not least, the 2014 Petrona Award for the Best Scandinavian Crime Novel  of the Year was awarded on Saturday to Leif G.W. Persson’s Linda, as in the Linda Murder, translated by Neil Smith.

In his acceptance speech, read out by Barry Forshaw on his behalf, Leif said:

My character Superintendent Evert Bäckström is actually not a nice person. He embodies pretty much every human prejudice – and then some – and he does so proudly and wholeheartedly. He feels that he is not only God’s gift to humanity but also the object of every woman’s secret fantasies. I myself, am a fully normal person – but there is a joy that he brings me when I tell the story of his life and times.

Now he and I have received an award. A very fine English award, which makes me especially happy as a large part of my family lives in England. There is one person with whom I most profoundly want to share this honour and that is my excellent translator Neil Smith who has succeeded in making this Swede, with his spiritual and physical roots in the Stone Age, at least intelligible for an educated Anglo-Saxon public. Thank you!

Shortlisted authors Yrsa Sigurðardóttir and Jørn Lier Horst attended the CrimeFest Gala dinner and were highly commended for their crime novels. It was a brilliant field and we judges had a very tough choice to make! 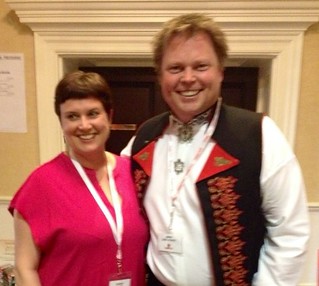 One of my favourite photos from the weekend: Sarah Ward (Petrona judge) with shortlisted author Jørn Lier Horst – in traditional Norwegian dress.