CrimeFest is nearly upon us, which means that lots of excited crime readers, bloggers, authors and publishers are getting ready for their annual pilgrimage to sunny Bristol.

This year’s CrimeFest will be very special, because there’s a panel on German crime fiction for the very first time, with four top German crime writers being flown in by the Goethe-Institut London to discuss their works and the delights of the Krimi. I’m delighted to be moderating the panel, not least because I’ve had the pleasure of reading a host of excellent crime novels and thrillers as part of my prep. And yes, Erich the Bavarian Duck will definitely be there!

‘Wunderbar! The Hidden Wonders of the German Krimi’

The panel features German crime authors Mario Giordano, Merle Kröger, Volker Kutscher and Melanie Raabe in conversation with Mrs P. Topics under discussion will include the diverse crime models the authors use to tell their stories  – from historical crime fiction and political thrillers to psychological thrillers and comic crime – and the way in which their settings, ranging from 1930s Berlin and contemporary Sicily to the more claustrophobic confines of a cruise ship, boat or house, have shaped their work. The panel offers an excellent opportunity to see four of the brightest talents of German crime fiction in person. If you’re at CrimeFest, please do come along! 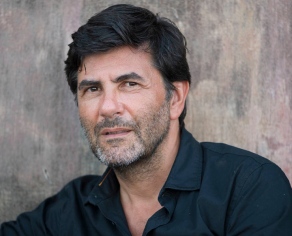 Mario Giordano has written numerous novels and YA books, as well as screenplays for the iconic German TV crime series Tatort. In 2001, he adapted his novel Black Box for film, resulting in the award-winning The Experiment (dir. Oliver Hirschbiegel). Mario’s debut crime novel, Auntie Poldi and the Sicilian Lions (John Murray), is his first novel to be translated into English and the first of a comic crime series set in Sicily.

Merle Kröger produces films and documentaries for international arthouse cinema, and is a scriptwriter for independent cinema in India. Since 2003, Kröger has published four novels, which combine documentary research, personal history and political analysis with elements of crime fiction. She received the prestigious German Crime Fiction Prize for Grenzfall (2013) and Havarie (2016). The latter will be published in the US in 2017, entitled Collision.

Volker Kutscher worked as a journalist before turning to crime. His award-winning ‘Gereon Rath‘ series currently consists of six novels, which are set in a politically turbulent 1920s and 1930s Berlin. The series has been translated into ten languages, and the first two novels – Babylon Berlin and The Silent Death – are available in English with Sandstone Press. The series is also currently being adapted for TV by ARD/Sky, with Tom Tykwer directing.

Melanie Raabe grew up in eastern Germany, and attended the Ruhr University Bochum, specialising in media studies and literature. After graduating, she moved to Cologne to work as a journalist by day and secretly write books by night. Her psychological thriller The Trap (Mantle) won the Stuttgart Crime Fiction Prize for best crime debut of the year, has been sold to more than 20 countries, and has been optioned for a film by TriStar Pictures.
***
Huge thanks to the Goethe-Institut London for making this event happen, and to RIAH at Swansea University for its support!
***

7 thoughts on “*First ever* CrimeFest panel on German crime fiction, Friday 19 May 2017”