Having been extremely jealous of everyone at Iceland Noir last year, it was brilliant to make it this November, not least because Reykjavik has been on my wishlist of places to visit for a long, long time. The event was held at Nordic House, and was expertly organised by author Quentin Bates and the rest of the Icelandic Noir team, who put together a great programme over two days. Quite a few bloggers have already posted reports (see list below), so I’m going to focus on the panels/discussions that particularly interested me and say a little about my first impressions of Iceland … with plenty of photos!

Nordic Perspectives panel – and yes, it was early in the morning…

Nordic Perspectives. This panel featured David Hewson (UK), Hans Olav Lahlum (Norway), Lilja Sigurðardóttir (Iceland) and Michael Ridpath (UK), with Jake Kerridge moderating. It was interesting to see how these authors positioned themselves or their countries’ crime output in relation to ‘nordic crime’. Sigurðardóttir felt that Icelandic crime had affinities to Scandinavian crime through its focus on the complexity of the criminal (citing the work of Norwegian author Karin Fossum as an example). However Lahlum saw himself as a historical crime writer rather than a Nordic crime writer, while Ridpath’s Icelandic-American investigator is an insider-outsider figure who negotiates different cultural traditions.

This panel also included discussion of historical crime fiction and adaptation. Lahlum told us that Norwegian crime fiction often engages with historical events, especially the Second World War (as evidenced in his novel The Human Flies). Hewson discussed his adaptation of the Danish TV crime drama The Killing, which involved adding contextualising historical detail. For example, the beginning and end of The Killing II are set in Ryvangen Memorial Park, which was the site of partisan executions by the Nazis and points to the core theme of the series – the long-term impact of war on society. Hewson provided extra information about the memorial, as British readers would not be aware of its significance (interesting; now on my TBR pile).

The ‘translating crime fiction across cultures’ panel featured Viktor Arnar Ingólfsson (Iceland), Mari Hannah (UK), Bogdan Hrib (Romania) and Vidar Sundstøl (Norway), with academic Jacky Collins moderating. I left this panel wanting to read Sundstøl’s Minnesota Trilogy: the first installment, The Land of Dreams, won the prestigious Riverton Prize in 2008, and its exploration of Norwegian-American history and culture sounds right up my street. It was also interesting to hear Hrib discussing Romanian crime novels and his ongoing mission to see them more widely translated into English: there are currently just three, published by Profusion Press, which I’m now curious to read. Mari Hannah tantalised us by revealing that she’s written a novel partly set in Norway (a break from the Kate Daniels series, which we were reassured is also continuing). Icelandic author Ingólfsson currently has one novel translated into English – The Flatley Enigma – with others translated into German, which appears to be quite a common route for Icelandic writers (those Germans do love their nordic Krimis!).

The panel gave a fascinating insight into the dialogue between writers and translators about linguistic and cultural issues during the process of translation, although Gunnarsson also illustrated the important role of technology today: when translating Nesbo, he used Google Earth to take a closer look at Oslo, a city he’s never visited but now feels he knows well. Tuomainnen made lifelong friends in the translation community with his heartfelt appreciation for the work of the translator; he also specifically thanked Sigurdur Karlsson for translating his work and for bringing it to the attention of Icelandic publishers in the first place, thereby highlighting the influential role translators play in identifying promising new work. The Icepick was awarded on the Saturday evening at the Iceland Noir dinner (for further details, see my previous post).

Tuomainnen popped up again on the settings panel with Ragnar Jónasson (Iceland), Johan Theorin (Sweden) and Vidar Sundstøl (Norway), moderated by Jacky Collins. The settings discussed included urban Finland, a village in northern Iceland, an isolated Swedish island and the American Midwest. In each case, the novel’s location plays a crucial role – sometimes even becoming a character in its own right – and is used to create unease or suspense (Theorin’s Öland novels), a sense of remoteness and isolation (Jonasson’s Dark Iceland series), or to explore themes such as migration (Sundstol’s Minnesota Trilogy) and climate change (Tuomainen’s The Healer).

One of my favourite panels was on supernatural crime, featuring James Oswald (Scotland), Johan Theorin (Sweden), Alexandra Sokoloff (US) and Michael Sears (South Africa) in discussion with Jake Kerridge. It was fascinating to hear the varying reasons why crime authors use supernatural elements in their work: as a means of exploring the clash between the rational and irrational (Oswald), illustrating evil (Sokoloff), exploring cultural beliefs (Sears) or taking genre in new direction (Theorin). Hearing the panelists talk about the extra dimensions the supernatural can add to a crime narrative reminded me why I like hybrid crime fiction so much: there’s a creativity at work here that pushes the boundaries of the genre and – when it works – can produce fantastic results. Sokoloff rather intriguingly described a magpie approach when writing – she has blended Jewish lore and witch-y elements into her novels to create particular effects. And it struck me that at least two other writers at the conference – Tuomainen and Icelandic author Yrsa Sigurðardóttir – also write hybrid crime fiction (drawing on traditions of apocalyptic literature and horror). The days when crime publishers were reluctant to publish this type of fusion fiction thankfully appear to be over.

Other blog posts, articles and tweetery on Iceland Noir 2014:

Do also check out the site for next year’s rather wonderful-looking Shetland Noir (Iceland Noir will be back in 2016).

I’m going to finish up with a few Reykjavik/Iceland photos to show those of you who haven’t yet visited what a great place this is!

1. An Eymundsson bookshop in Reyjkavik. This capital, which is around the size of my hometown Swansea, with a population of around 200,000, has at least five massive bookshops. Iceland is a nation of book lovers with a deep appreciation of culture (probably instilled by long winter nights and the reading aloud of Icelandic sagas). Fittingly, Reykjavik is a UNESCO City of Literature. 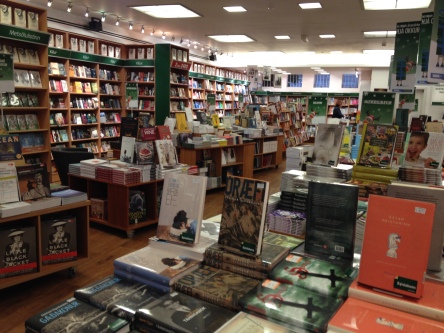 2. The bubbling, steaming landscape of Haukadalur. Wandering around on a crust of earth just above plentiful geothermal activity, with geysers going off at regular intervals, instils an added appreciation of our volatile, ever-changing planet. In a land not heavy on natural resources, Icelanders have made the most of their free geothermal energy to heat their homes, create outdoor thermal pools, grow tomatoes, process aluminium, keep their streets de-iced, and so on… Ingenious and admirable. 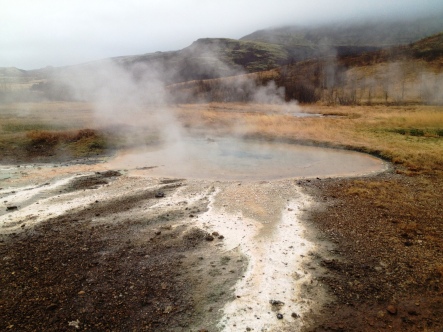 The land of fire and ice – a geothermal landscape here, but glaciers are not far away

3. Reykjavik is charming. Here are a few random photos.

Hallgrímskirkja, which looks a lot like a space rocket, guarded by the statue of Leifur Eiriksson 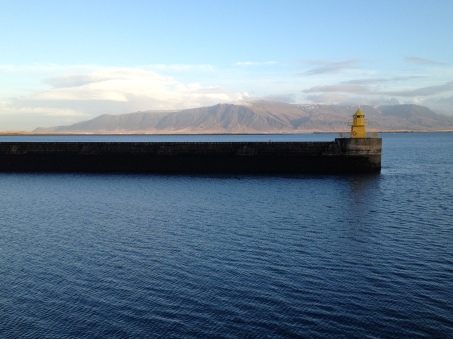 Reykjavik Harbour, looking out to Faxafloi Bay and the mountains beyond

4. There’s a lot of Icelandic wool. Which gets turned into gorgeous mittens to feed my newly discovered mitten addiction. 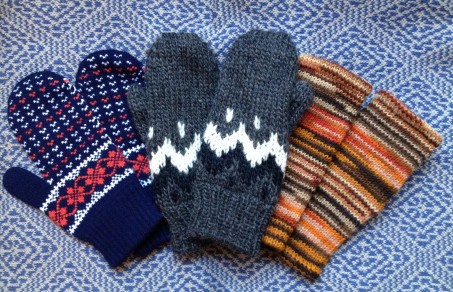 5. Friendly Vikings. I think this is my favourite Iceland Noir photo. 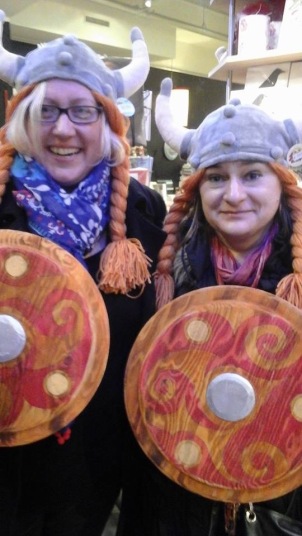 Huge thanks to the Iceland Noir organisers for making the event such a wonderful success!