Last Friday, to pass some time while ill in bed, I started listening to the podcast SERIAL, which explores a real and very complex murder case from 1999. I don’t consider myself to be a fan of true crime, which is all too often voyeuristic and salacious, and so wasn’t expecting to get drawn in. But I found myself hooked from the opening of the very first episode, and by the end of the day had listened eight (EIGHT!) episodes. 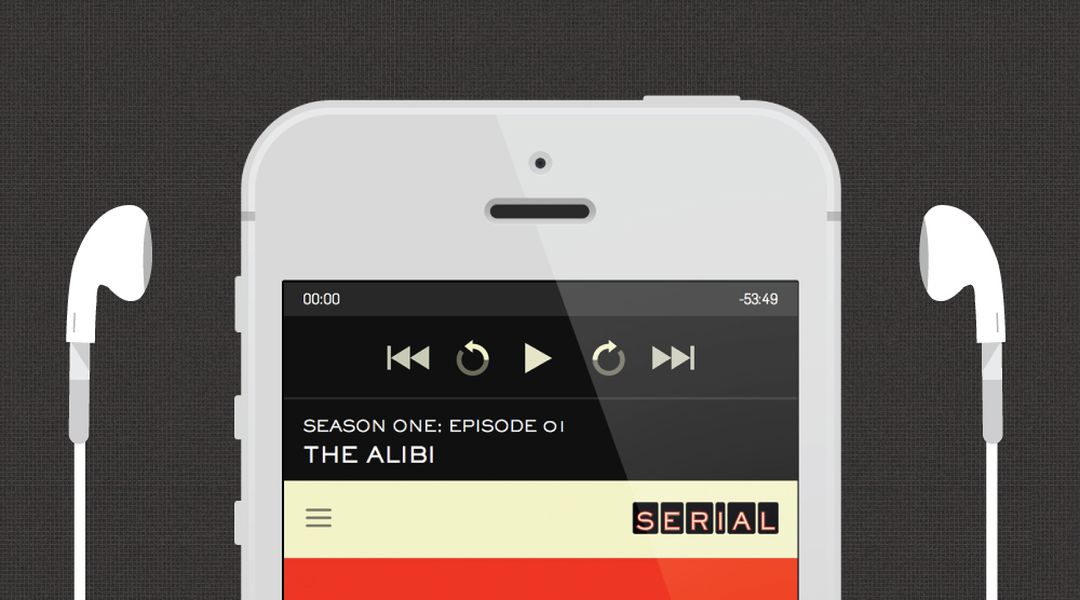 SERIAL is a podcast phenomenon. Since it started in October it has become the fastest podcast on iTunes to be downloaded or streamed 5 million times, and is one of reddit’s most discussed topics. The series first crossed my radar when writer Linda Grant wrote about her fascination with it and I’m glad to have finally caught up, because it’s genuinely brilliant.

SERIAL is an offshoot of This American Life (a weekly radio show by Chicago Public Media), and is presented by journalist Sarah Koenig. This is how SERIAL’s website describes what the podcast is about:

>> On January 13, 1999, a girl named Hae Min Lee, a senior at Woodlawn High School in Baltimore County, Maryland, disappeared. A few weeks later, her body turned up in a city park. She’d been strangled. Her 17-year-old ex-boyfriend, Adnan Syed, was arrested for the crime, and within a year, he was convicted and sentenced to life in prison. The case against him was largely based on the story of one witness, Adnan’s friend Jay, who testified that he helped Adnan bury Hae’s body. But Adnan has always maintained he had nothing to do with Hae’s death. Some people believe he’s telling the truth. Many others don’t.

Sarah Koenig first learned about this case more than a year ago. In the months since, she’s been sorting through box after box (after box) of legal documents and investigators’ notes, listening to trial testimony and police interrogations, and talking to everyone she can find who remembers what happened between Adnan Syed and Hae Min Lee fifteen years ago. What she realized is that the trial covered up a far more complicated story, which neither the jury nor the public got to hear. The high school scene, the shifting statements to police, the prejudices, the sketchy alibis, the scant forensic evidence – all of it leads back to the most basic questions: How can you know a person’s character? How can you tell what they’re capable of? In Season One of Serial, she looks for answers. <<

So the podcast is a 360 degree examination of a murder case, one that Sarah carries out with great intelligence, care and respect for all the individuals involved. Although the hope is to get to the bottom of the case’s contradictions by looking at the evidence with fresh eyes, Koenig pledges to ‘follow the story where it takes us’, even if that means failing to achieve closure. It’s this willingness to accept all outcomes that is one of the series’ chief strengths; in many respects it is a thoughtful meditation on the difficulty of finding the truth.

Eleven episodes of SERIAL are currently available. The 12th and final episode airs this coming Thursday. If you haven’t yet listened, you might want to leave this post and head over to episode 1. If you’ve already caught up, you might be interested in reading on below…

What I’m not going to discuss is the (admittedly fascinating) question of Adnan’s guilt or innocence, because it’s being dissected exhaustively elsewhere, and to an extent that makes me feel uneasy. Arguably, one of the few pitfalls of the podcast is that it’s been treated by some as a fictional crime whodunit, losing sight of the fact that the story is about real people. I’m more interested in the insights Sarah Koenig (SK) has offered listeners into the impact of murder, the minutiae of police investigations and the complexities of the trial process. These are meta-observations that have made me think really, really hard about the justice system in a way that I haven’t done before.

Memory. The first episode of SERIAL opens with an observation about how hard it can be to remember past events. Can you remember exactly what you were doing the whole of last Wednesday? Now, how about a Wednesday six weeks ago, which turns out to have been the day of a murder, in which you are a suspect? What happens if you genuinely can’t remember? Or if you think you can, but then realise you’ve got it wrong? Or if you can, but no one can corroborate what you say? Any of these could be the beginning of a road to wrongful conviction. Unless of course you’re lying, which is when things get even trickier.

A piece of evidence can appear utterly damning when viewed in one context, and completely innocent in another. It all depends on how you build it into a larger narrative or how you spin it. SK demonstrates this by discussing specific bits of evidence with those who think Adnan is guilty and those who don’t. The same applies in the courtroom: building a convincing narrative is key for the prosecution and defence. They are telling competing stories to the jury and are fighting for their own to be believed.

The power of narrative is also illustrated by the podcast itself (something that SK does not explicitly acknowledge). Episodes are constructed in such a way as to consider one side of the argument, then the other, and inevitably sway the listener back and forth as well (ooh, he’s guilty/nooo, he can’t be). There’s a cliff-hanger element built into the episodes, with previews of ‘next time’ promising new evidence that will keep us hooked. Very successfully.

On a moral level, we listeners are gripped by questions of guilt or innocence. But in a legal context, guilt or innocence may never be definitively proved. The more important question then becomes ‘is there reasonable doubt’?

Murder investigations are HUGELY complex. We all know this, but listening to over ten hours of detail about one case makes you appreciate that fact all the more. It instills a respect for police investigators, who have to process mountains of potential evidence and decide what it relevant and what is not. It also makes you realise how easily the truth can be lost if the wrong leads are followed, or if prejudices start to cloud investigators’ judgments.

The police are not necessarily looking for the truth. Rather, they are trying to build a case against someone. This means that there may be ‘verification bias’ present in the investigation – the disregarding of so-called ‘bad evidence’ that does not fit the detectives’ theories of what happened. Scary stuff, and this is why it’s so important for justice systems to have a robust element of defence and cross-examination, so that lots of difficult questions can be asked.

SK’s own investigations show us a range of different perspectives and voices: we hear sound clips of police interviews and court proceedings, readings from Hae’s teenage diary, SK’s interviews with family, friends and witnesses (all of whom were deeply affected by the murder), and her phone conversations with Adnan in prison. These are augmented by her own commentary on the difficulties she is encountering as she tries to figure out this ‘Rubik’s cube of a case’.

‘Cops assume that everyone is lying all the time’. A pragmatic, logical approach or a breach of the presumption of innocence? They will ‘offer the suspect a theme’ – meaning that they will discuss the subject of the crime in a way that suggests understanding to encourage a confession (e.g. ‘I can understand why you hit that man. After all he provoked you’).

‘How easy it is to stir stereotypes in with facts, all of which then gets baked into a story’. SK does a great job of exploring the possible bias of the judicial system (for example, the use of certain types of vocabulary in reports or in court). This quote is also a wonderful example of how SK sums up ideas in an accessible and interesting way.

I never quite realised how many factors can feed into the outcome of a trial: the quality of the prosecution or defence lawyers, cultural biases, the composition of the jury, alibis or the lack of alibis, the presence or absence of forensic evidence, the efficiency or inefficiency of the investigators (did they ask for that crucial item to be checked for DNA?), the willingness or refusal of witnesses to testify, the credibility of witnesses, etc. etc. etc.

If you are innocent, and continue to maintain your innocence following conviction, then your chances of parole are low, because the parole board is looking for evidence of remorse. So you can lie and get out, or be honest and stay in. Hmmmm.

SK and her listeners may be playing the role of the detective, but that does not remotely guarantee the discovery of a ‘solution’, because this is real life. Will the final episode offer listeners the closure they crave? At the simplest level, Adnan’s guilt/innocence may only be known to three people: murder victim Hae Lee, Adnan himself and his friend Jay. Of these last two, one has to be lying. I’m doubtful that SERIAL can reveal who’s telling the truth, but it certainly succeeds in showing us plenty of others.