We recently spent ten days in The Netherlands and thoroughly enjoyed our stay in Amsterdam and Rotterdam, two very different cities united by their easy-going feel and superb transport systems. Pedestrians, bikes and trams are given just as high a status as cars, and the result is a thoroughly civilized and less polluted urban experience. That and regular portions of apple pie with whipped cream made for a very pleasant trip.

Classic ‘sit up and beg’ bikes in Amsterdam, which work best on the flat!

While there, I read Herman Koch‘s bestseller The Dinner (Het Diner), which was published in 2009 and has been translated into over twenty languages. It was an interesting reading experience, as the image it presented of Dutch society felt totally at odds with the tolerant and relaxed society I was seeing around me.

The Dinner (trans. by Sam Garrett, Atlantic Books, 2012) depicts the events of one evening, interspersed with flashbacks, during which brothers Paul and Serge Lohman and their wives Claire and Babette meet for a posh dinner in Amsterdam. While seemingly two affluent and civilized couples enjoying gourmet food, the truth is somewhat different: the purpose of their meeting is to discuss how to deal with their teenage sons, who recently committed a shocking crime. No one yet knows the identity of the culprits, and so the question is how to proceed. Needless to say, there is some disagreement among the four, which ends up casting the Dutch middle classes in a rather unfavourable light.

Like the novellas of French author Pascal Garnier, The Dinner reveals the savagery lurking beneath the civilized exterior of polite society, its capacity for violence when threatened, and its willingness to sacrifice others in order to protect its own.  While a targeted critique of Dutch society, the novel also raises plenty of questions about class, parenting, family relations, moral choices, the individual’s capacity for violence, the nature vs nurture debate, and the fragility of liberal values. It’s a compelling and unsettling read.

A Dutch film adaptation of The Dinner appeared in 2013, and Cate Blanchett is set to make her directorial debut with an English-language adaptation soon.

Reading Koch’s work has whetted my appetite for more Dutch crime fiction. In particular, I’ve got my eyes on Harry Mulisch’s The Assault (1985), a hybrid crime novel that explores the repercussions of a resistance assassination in occupied Holland in 1945. (Mulisch is one of The Netherland’s best-known writers and died aged 83 in 2010 – see his obituary here). An excellent CrimeTime overview of Dutch crime fiction has also given me some useful pointers – ‘Crime Scene: The Netherlands’. 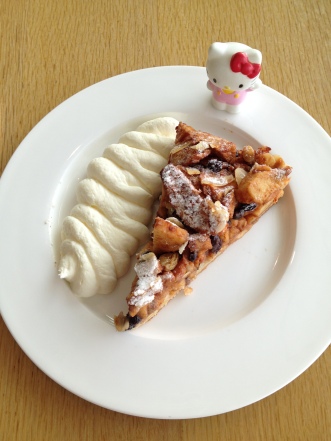 The aforementioned Dutch apple pie, with plenty of cinnamon.