My crime reading has been quite varied recently. I’m picking books more or less at random, depending on my mood and what crosses my path courtesy of publishers or charity shop finds. My last three have been about as different from one another it’s possible to be, but all have been excellent (if sometimes unsettling) reads. I’ll start with the most recent one and then move back in time.

Hans Olav Lahlum’s The Human Flies (trans. from Norwegian by Kari Dickson; Mantle, 2014 [2010]) sounds like a horror film that’s best avoided after a large meal. However, it turns out to be something quite different: a well-constructed and witty homage to the classic crime fiction of Agatha Christie, set in 1968 Oslo, which has some interesting historical depth. Featuring ambitious young police detective Kolbjørn Kristiansen on his first big case – the murder of a former resistance fighter – readers are treated to an apartment building of intriguing suspects and a page-turning investigation, as well as the considerable intellect of Kristiansen’s wheelchair-bound partner Patricia. I hugely enjoyed this ‘contemporary classic’ and look forward to reading the other novels in the K2 series soon. (Something a little different for us to consider for the 2015 Petrona Award as well…)

Thanks to the good people at Canongate, I’ve now been properly introduced to the work of Scottish crime writer William McIlvanney, who’s highly regarded by luminaries such as Ian Rankin and Denise Mina. The first in the ‘Laidlaw Trilogy’, named for its engaging lead investigator, maverick policeman Jack Laidlaw, was originally published in 1977, and paints a detailed picture of Glaswegian society through its exploration of a young woman’s murder. The novel’s characterisation is complex and sensitive, and shows tremendous sympathy for those marginalised by their social status or sexuality in a less enlightened era. I imagine it would have broken new ground in the 1970s, and it’s stood the test of time extremely well. McIlvanney, who’s a versatile writer and poet, is appearing at this year’s Bloody Scotland crime writing festival.

Francis Iles (aka Anthony Berkeley Cox), was a Golden Age crime writer whose novel Before the Fact appeared in 1932 (republished by Arcturus in 2011). There’s no genial private investigator in sight, however. Instead, we’re plunged into an unsettling psychological thriller, narrated by Lina McLaidlaw, a plain but wealthy woman married to the charming but worryingly amoral Johnny Aysgarth. As time goes by, Lina’s suspicions that Johnny is capable of murder grow, and she fears she’ll be next on his list. But is she just being paranoid? While dated in some respects, the novel holds good as an astute dissection of power relations and abusive relationships, and has one of the most unsettling endings I have ever read. Alfred Hitchcock used it as the basis for his 1941 film Suspicion, starring Cary Grant and Joan Fontaine, but softened the ending, presumably for commercial reasons. If you’re interested in classics of the genre, this is a must read. 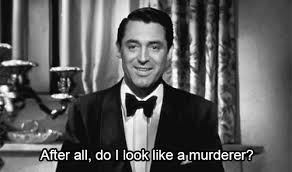 17 thoughts on “Norwegian, Scottish and English crime … with a hint of Hitchcock”