The big work deadlines have been met, so it’s time to wind down with some summer crime…

I recently treated myself to two crime novels from the wonderful selection at Orenda Books: Vanda Symon’s Overkill and Antti Tuomainen’s The Rabbit Factor (translated from the Finnish by David Hackston).

So far I’ve read the excellent Overkill, the first in Symon’s ‘Sam Shephard’ series, which is set in rural New Zealand. When young mother Gaby Knowes goes missing in odd circumstances, Sam, the police constable with sole responsibility for the small town of Mataura, is called in to investigate. After Gaby is found washed up dead on the river bank, things get very complicated, not least because Gaby’s husband is Sam’s ex. Now, as well as having to untangle what happened to Gaby, Sam has to prove that she had no involvement in events herself.

Sam is a really great character: down-to-earth, self-deprecating and smart as a whip (as is her long-suffering flatmate Maggie). I hugely enjoyed the novel’s depiction of small-town New Zealand life and its nature, and the resolution to the mystery was very satisfying as well. 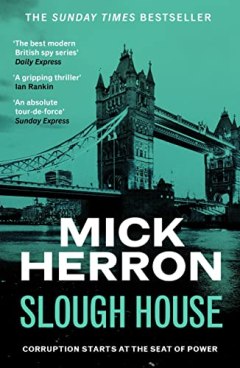 Mick Herron has just won the 2022 Theakston Old Peculier Crime Novel of the Year Award for his thriller Slough House, the seventh in the ‘Slough House / Slow Horses’ series. It was actually Mick’s fifth shortlisting for the award in six years, so this must have been a particularly satisfying win, and was possibly helped along by the new TV adaptation featuring Gary Oldman as Jackson Lamb. I’m a big fan of the series, which I always think of as an off-beat successor to John le Carre’s ‘Smiley’ novels. How funny that Gary Oldman has now played both Smiley and Lamb!

As it happens, I’ve just read Herron’s Dolphin Junction (Baskerville 2021), a wonderful set of stories starring both Jackson Lamb and the investigative duo Joe Silverman / Zoë Boehm. Highly enjoyable and perfect for lounging in the park on a warm summer’s day. 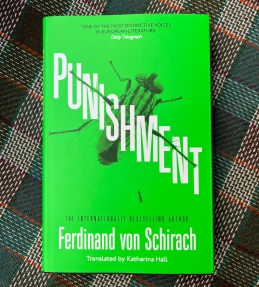 There’s another set of short stories out on 18 August from Baskerville: Punishment by German defence-lawyer-turned-writer Ferdinand von Schirach. The translator is my good self (as readers of this blog may know, I left academia in 2016, and have worked as a professional translator and editor since then). I can’t wait for Punishment to be out in the big wide world, and will tell you lots more about this unforgettable book on publication day. In the meantime, you can find out more here.

Wishing you all lovely summer days and happy reading!

8 thoughts on “Summer smörgåsbord of crime”