Hej from Stockholm! Today’s extract is from…

Karlbergsvägen 66 in Stockholm is the location of Günter’s, the best hotdog kiosk in Sweden. It’s surrounded by sturdy stone buildings many storeys high, all constructed at the start of last century. Solid brickwork, carefully laid, brick upon brick, with lime-mortar rendering, bow windows and old-fashioned glass. There are generous lawns in front of the properties and – at this time of year – leafy trees lining the street. When you enter the buildings there is usually red marble in both the lobbies and stairwells, friezes on the ceilings, ornate plasterwork, even dado panelling in places. The skirting boards and doors are made of oak. It is an area that gives a bourgeois, affluent impression.

Günter’s is also located within the old city boundaries of the most beautiful capital in the world. Just a few hundred meters south of Karlberg Palace and Karolinska University Hospital, and close to two of the major roads leading away from the north of the city centre.

The former head of the National Criminal Police, Lars Martin Johansson, really ought to have been at his summerhouse up in Roslagen today, but that morning he had been obliged to come into the city for a meeting with his bank, to conclude a deal about a patch of forest that he and his eldest brother had an interest in. […]

Just a few hundred meters before he would be passing the old tollgate at Roslagstull on his drive north, his hunger got the better of him. There was no way he was going to spend an hour driving when his stomach was already screaming at him. So he took a quick detour to the best hotdog kiosk in Sweden for a well-spiced Yugoslavian bratwurst with salt-pickled Åland gherkins, sauerkraut and Dijon mustard. Or maybe a Zigeuner sausage with its taste of freshly ground pepper, paprika and onion? Or should he stay true to his Norrland roots and partake of a lightly smoked elk sausage with Günter’s homemade mash of salad potatoes?

One of my first destinations in Stockholm was of course Günter’s, the best hotdog kiosk in Sweden. What can I say? The hotdogs are indeed divine (I had a Thüringer with salt-pickled Åland gherkins) and it’s clear from the queues that the place has genuine cult status. Pleasingly, part of the extract above was pinned on the kiosk’s noticeboard: they are rightly very proud of their Persson connection. 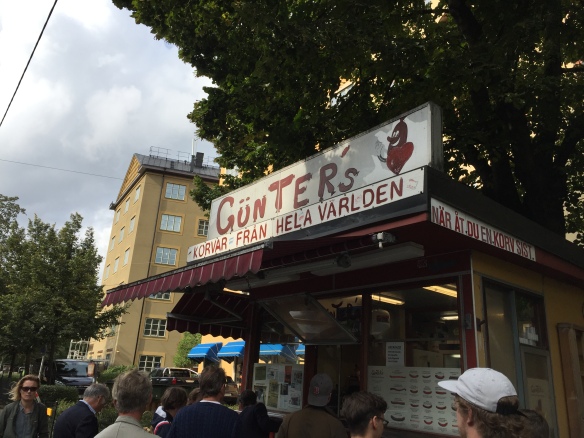 We’re both rather in love with Stockholm. The city is filled with architectural beauty and its location on the water is stunning. We’re getting around a lot by ferry.

Then there are the buns…

And last, but by no means least…THE ABBA MUSEUM. A lifetime’s ambition fulfilled! 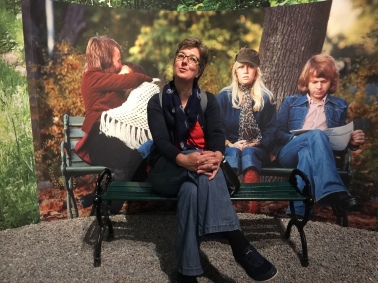 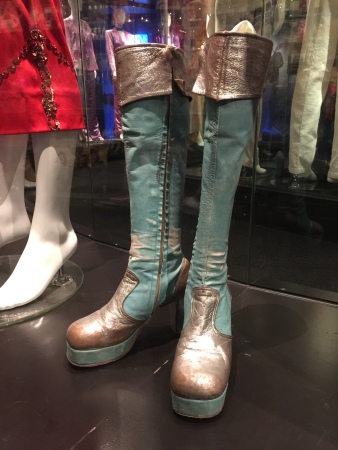 Click here for an overview of Mrs. Peabody’s Eurotour

13 thoughts on “Eurotour Stop 3. Stockholm, Sweden: “So he took a quick detour to the best hotdog kiosk in Sweden””