I picked up the first novel in Roberto Costantini’s Balistreri Trilogy, The Deliverance of Evil (trans. N. S. Thompson, Quercus, 2014 [2011]), at this year’s CrimeFest after seeing the author on a couple of panels. Costantini was extremely articulate about how his personal links to Tripoli and Rome shaped the trilogy and how his writing style is influenced by his work as an engineer. My interest was also piqued by the description of his main protagonist, Commissario Michele Balistreri, as a morally flawed individual with a complex political past. 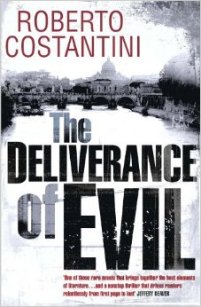 Coming in at just over 600 pages, The Deliverance of Evil is a novel for readers who enjoy complex, multi-layered crime narratives. Framed by Italy’s two Football World Cup victories in 1982 and 2006, it spans twenty-five years of Italian history, but also explores the legacy of Mussolini’s right-wing dictatorship and of the so-called ‘strategy of tension’ – a series of right-wing terrorist attacks in the 1960s and 1970s (possibly encouraged by the military and intelligence services), which were blamed on communists to provoke a political shift to the right. Balistreri, the narrative’s main investigator, acts as a kind of repository for this complex history: as a young man, he was drawn to the ultra right-wing Ordine Nuovo, but when it became involved in terrorist acts, worked undercover for the state in an attempt to stop them. When the narrative opens in 1982, he has supposedly left that past behind him, after being transferred to a quiet police post in Rome. 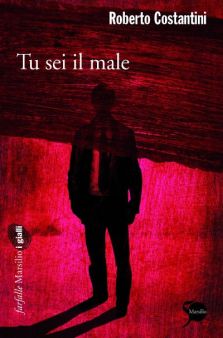 The crime at the heart of the narrative is the murder of Elisa Sordi, a young woman who works for a religious housing organisation. The detective, keen to enjoy the 1982 World Cup final, is distracted during the initial investigation. This and a number of other factors result in the case remaining unsolved until 2006, when another woman is murdered in apparently similar circumstances. Wracked with remorse and guilt for his earlier failures, Balistreri vows to solve both cases and uncover the truth.

The Deliverance of Evil is a hugely absorbing, accomplished piece of work. While the denouement, which resembles an intricate origami creation, had me raising an eyebrow a little at times, the figure of Balistreri, together with the clever construction of the narrative and its dissection of Italian privilege, politics and racism made for a highly gripping read. I’ll definitely be seeking out the second in the trilogy, which moves back in time to the 1960s to explore Balistreri’s troubled past in Libya.

I have a bit of a thing about crime trilogies or quartets. They’re often quite special, which I think is due to two factors. Firstly, they give authors the chance to explore multiple facets of an overarching story in a group of novels, allowing them to create extended and complex literary worlds. Conversely, the limit of having a set number of novels (as opposed to an on-going series), encourages authors to take more risks, especially in terms of the characterisation of their protagonists and the overall denouement. Standalones and trilogies/quartets are thus usually more hard-hitting than a series, not least because they don’t need to safeguard the investigator or main protagonist indefinitely. They also often undertake a wide-ranging social and/or political critique, which I like.

Here are few of my favourite crime trilogies and quartets:

David Peace’s Yorkshire Noir/Red Riding Quartet (1974, 1977, 1980, 1984), which is set against the backdrop of the Yorkshire Ripper case and provides a brilliant depiction of corrupt policing cultures.

Andrew Taylor’s Roth/Requiem for an Angel Trilogy (The Four Last Things, The Judgement of Strangers, The Office of the Dead) which skillfully excavates the history of a female serial killer, beginning in the present day and moving back to the 1970s and the 1950s.

Ben Winter’s Last Policeman Trilogy (The Last Policeman, Countdown City, World of Trouble), set in a superbly realised world on the brink of destruction (I still need to read the final novel, and am looking forward to it very much). 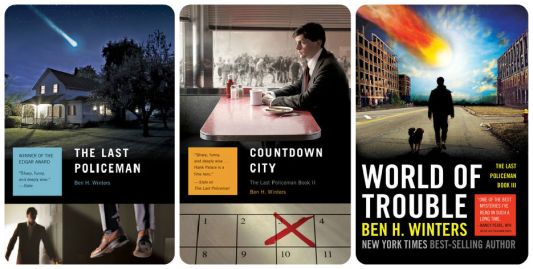 Stieg Larsson’s Millennium Trilogy (The Girl with the Dragon Tattoo, The Girl who Played with Fire, The Girl who Kicked the Hornet’s Nest), featuring the remarkable, indefatigable Lisbeth Salander.

Leif G.W. Persson’s Story of a Crime Trilogy (Between Summer’s Longing and Winter’s End, Another Time, Another Life and Free Falling, As in a Dream), which probes the unsolved assassination of Olof Palme in an absorbing and darkly sardonic manner.

Philip Kerr’s Berlin Noir Trilogy (March Violets, The Pale Criminal, A German Requiem), which explores Nazi Germany in 1936 and 1938 and Allied Occupation in 1947 through the eyes of former Berlin policeman Bernie Gunther. The author later extended the trilogy into a series, but the original three novels remain the best in my view.

Perhaps you have others we could add to this list?

Update: Well, what a brilliant response. Thanks to MarinaSofia, Margot, Rebecca, Bernadette, David, Tracey and Angela for their suggestions (see also their comments and those of others below), and to Barbara, Jose Ignacio and Craig Sisterson via Twitter for trilogies/quartets by women authors. All listed below…

Lyndsay Faye’s New York Trilogy (The Gods of Gotham, Seven for a Secret, The Fatal Flame)

Adrian McKinty’s Troubles Quartet (The Cold Cold Ground, I Hear the Sirens in the Street, In the Morning I’ll Be Gone and Gun Street Girl – set in Ireland)

Dolores Redondo’s Baztan Trilogy. The first, The Invisible Guardian is available in translation and is set in Spain’s Basque country. The other two are entitled Legado en los huesos (Legacy in the Bones) and Ofrenda a la tormenta (Offering to the Storm).

Robert Wilson’s Falcon Quartet (The Blind Man of Seville; The Silent and the Damned; The Hidden Assassins; The Ignorance of Blood – set in Spain)