I’m just back from a couple of crime-filled days in London. The main reason for my visit was to speak at a symposium on European crime fiction and data visualisation (of which more later), but I travelled up a day early in order to see the Forensics exhibition at The Wellcome Trust.

The Wellcome Trust is by Euston Square station. Get there early, as it’s a popular exhibition

I’ve already written about the Forensics exhibition in a previous post, so here’s a summary of the parts I particularly liked.

A note of warning: the exhibition is not for faint-hearted, as some of the images and commentary it contains are extremely graphic. I was grateful for a strong and steadying cup of coffee in the Wellcome Cafe afterwards. But I would highly recommend a visit – see the exhibition website for more details here.

Drawing breath in the Wellcome cafe…

Friday was spent at the British Library, taking part in the symposium ‘Towards a Digital Atlas of European Crime Fiction?’ – part of an AHRC project run by Dominique Jeannerod and Federico Pagello of Queen’s University Belfast. The project is evidence of how rapidly the ‘digital humanities’ – which explore the contribution of ‘big data’, technology and data visualisation to humanities research – are expanding, and was of course particularly interesting as it considered these areas in relation to European crime.

Eduardo Paolozzi’s statue of Isaac Newton at the British Library

The morning was spent hearing the project contributors’ findings. What I liked about this section was the chance to see some data visualisations, to discuss the metho-dological and technical challenges involved in their creation (e.g. getting from ‘dirty’ to ‘clean data’), and to get an idea of the kinds of case studies involved (French, Hungarian and European crime). I had expected the speakers to be evangelical about digital research, but they discussed its advantages and disadvantages in very even-handed and thoughtful ways – such as the capacity of ‘distant reading’ to make trends visible against the time that inputting and cleaning data can take. The project is designed to have an exploratory function and as someone considering increased use of digital methods in my research, I found these reflections very useful indeed.

The afternoon saw presentations from researchers on diverse digital tools and analysis in research on Czech, French, New Zealand and German crime (the latter from yours truly, on my Nazi-themed crime fiction database and this blog), as well as a talk from Samuel Schwiegelhofer of the Paris Bibliothèque des littératures policières (BiLiPo – a library dedicated to crime fiction!). That was followed by a marvellous keynote from Ian Sansom (crime author and academic), which ranged from the work of theorist Franco Moretti to the horse’s head in The Godfather and Ian’s garden shed. 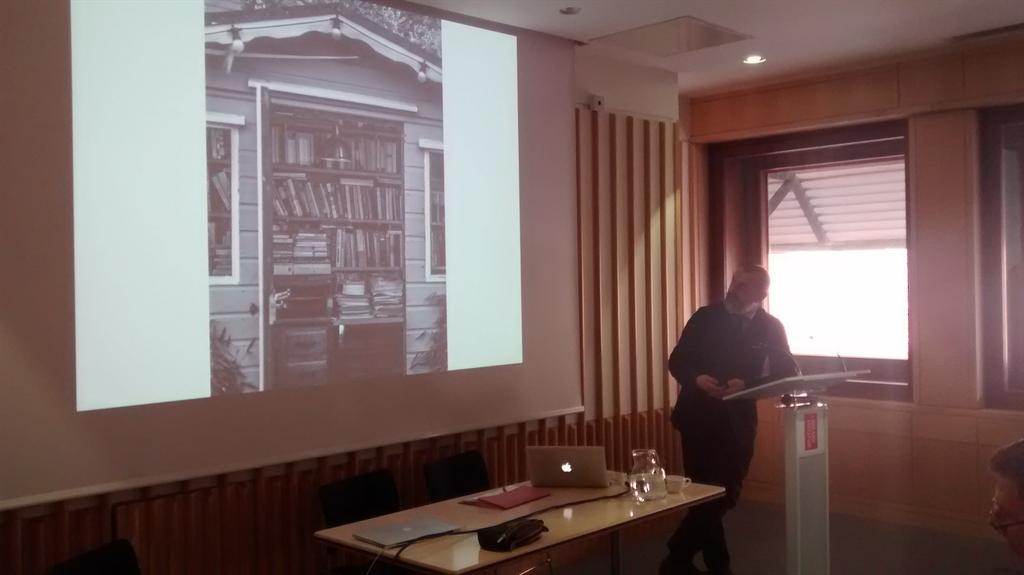 Professor Ian Sansom with his shed. Photo by Federico Pagello

All in all, the symposium was a rich and valuable experience, not least because it provided the chance to meet like-minded researchers from around the world, and has made me think deeply about my own research and its digital possibilities. Many thanks to the organisers for making it such a successful event.

If you’re interested in finding out more about the project, then take a look at the International Crime Fiction Research Group blog or follow the group on Twitter – @crimefictionrg. A website with lots of useful resources is on its way.

Last but not least, the trip provided a great opportunity to meet friends and co-conspirators from the crime blogosphere, including Jacky Collins, Andy Lawrence, Ewa Sherman and Sarah Ward. There were pilgrimages to The Scandinavian Kitchen and Maison Bertaux (the latter, London’s oldest patisserie, was a great find courtesy of Andy).

Large amounts of cake may have been consumed.