First lines: If only grandfather had been with me. He always knew what to do.

I hugely enjoyed this Icelandic mystery by Swiss author Joachim Schmidt (who lives in Iceland), splendidly translated by Jamie Lee Searle from the original German.

Our narrator is Kalmann, a neurodivergent young man who is the self-appointed Sheriff of Raufarhöfn, a tiny village in the north-east of the country – right up by the Arctic Circle – also home to the striking Arctic Henge.

It’s here that Kalmann is shaken by the sight of a pool of blood and faint footsteps leading off into the snow. When local entrepreneur Róbert is found to have disappeared, the police become extremely interested in what Kalmann saw and has to say…

Schmidt deftly sidesteps any kind of Forrest Gump sentimentality, allowing Kalmann’s highly original worldview to draw readers in. He reminded me a little of a grown-up Christopher from The Curious Incident of the Dog in the Night-time, but with a very Icelandic twist: he’s a crack hunter of Arctic foxes and gigantic Greenland sharks, and an expert at making the fermented delicacy hákarl – which I’m reliably told is an acquired taste… We also get to know Kalmann’s family and his community, which is grappling with a number of economic challenges and social changes. I particularly liked the depiction of Kalmann’s relationship with his beloved grandfather, and how he has to work out how to handle this very tricky situation without the latter’s guidance.

First lines: We are born with a startle reflex. Apparently it’s caused by the sensation of falling.

Tessa, a producer at the Belfast bureau of the BBC, is at work one day when she sees a news clip on screen. As the anchor appeals for witnesses to an armed robbery at a petrol station, Tessa’s sister Marian appears in the footage, pulling a black ski mask over her face.

Two decades have passed since the 1998 Good Friday Agreement that secured peace in Northern Ireland. But some IRA splinter groups are still active, and now Tessa must face the possibility that Marian has been living a double life that endangers her and her family. It’s the start of a journey in which Tessa must balance her loyalty to her sister, her young son, and the community she lives in, while navigating the most complex situation of her life. It’s a thoroughly engrossing and illuminating read.

Some reviewers have compared this novel with le Carré’s work and I think that’s justified. Berry is very good on how individuals find themselves getting pulled into complex intelligence situations, and how powerful organizations lure people in, but then use them and spit them out. That’s something we very much see in le Carré as well (e.g. The Spy Who Came in from the Cold; The Looking Glass War). But the angle here is a new one: events as viewed by a young mother for whom there is a huge amount at stake — and this gives Northern Spy original depth.

As an aside — Tessa and Marian’s relationship had strong echoes for me of Juliane and Marianne’s relationship in Margarethe von Trotta’s 1981 film Die bleierne Zeit (Leaden Times), about two sisters in 1968-era Germany who take very different political paths. A possible inspiration?

I stumbled on this ‘scripted podcast’ (aka serialised drama) on Spotify while I was browsing the other day. It turned out to be a bit of a gem – a very witty exploration of a curious bit of American history between 1919 and 1921: the cover-up of President Woodrow Wilson’s stroke by his wife Edith, and the very real possibility that the First Lady misled elected officials and assumed the presidential mantle of power herself — which of course would have been both unconstitutional and a federal crime. Rosamund Pike (of Gone Girl fame) is excellent in the role of Edith, and is backed by an great cast, especially Esther Povitsky as the unforgettable Trudie Grayson.

The CWA 2022 Daggers were announced on Wednesday at a glittering ceremony in London. You can see all the winners here on the Waterstones / Daggers site.

I was delighted to see wonderful German crime writer Simone Buchholz win the CWA Crime Fiction in Translation Dagger for Hotel Cartagena (Orenda Books). It’s the fourth in the ‘Chas Riley’ series to be published in English, all translated by Rachel Ward, who captures the noirish P.I. cadence of the novels perfectly.

Simone appeared on one of the Krimi panels I chaired at CrimeFest a few years ago and was great! You can read a wide-ranging Mrs P interview with her here. 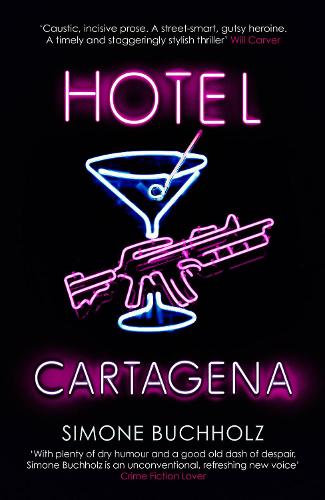 2 thoughts on “Kalmann, Northern Spy and Edith! – crime from Iceland, Northern Ireland & the USA (with bonus bit on the 2022 CWA Daggers)”