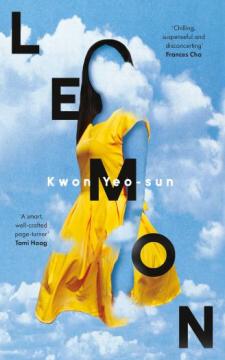 First line: I imagine what happened inside one police interrogation room so many years ago.

This opening line is narrated by a young woman called Da-on, as she reflects on her beautiful older sister’s murder in Seoul on 1 July 2002.

There are two prime suspects, both of whom attended the same high school as victim Hae-on: Shin Jeongjun, the privileged son of wealthy parents, and Han Manu, the son of an impoverished single mum. But while the mystery of what happened to the nineteen-year-old girl is a powerful component in the narrative, its main focus is the impact of Hae-on’s death on those closest to her – her sister, her mother, her classmate. We are shown events unfolding largely through female eyes, in eight pithily titled chapters spanning from 2002 (‘Shorts’) to 2019 (‘Dusk’).

Here’s Da-on, for example, on the early trauma of her sister’s death:

The women’s grief and their struggle to fill the gap left by the dead girl are very finely drawn. Da-on embarks on two highly original strategies in this respect, each of which ultimately comes with a price – both to her and others – in the seventeen long years following Hae-on’s death.

Interwoven with all this is the theme of class, which is front and centre in other recent examples of crime-inflected South Korean culture, from the Oscar-winning film Parasite to Netflix hits Squid Game and Signal. We’re shown a justice system that’s stacked against those from less well-off backgrounds, and how the rich have more options due to their connections and wealth.

Lemon is a beguiling, unsettling, worthwhile read, which also offers some fascinating glimpses into South Korean culture thanks to Janet Hong’s sensitive and attentive translation.

If you’re interested in finding out more about Kwon Yeo-sun’s work, there’s an interesting interview with her over at Korean Literature Now.