by Malin Persson Giolito, translated from the Swedish by Rachel Willson-Broyles and published by Simon & Schuster.

The winner was announced at the CrimeFest Gala Dinner on 19 May. The trophy was kindly collected on Malin’s behalf by last year’s Petrona Award winner Gunnar Staalesen, who also read out Malin’s acceptance speech:

“Quicksand is a story about justice and fundamental human values, and I understand that Maxine Clarke – who inspired the Petrona Award – was someone who appreciated the social and political awareness of Scandinavian crime literature. We have that in common, and that is one of the many reasons why I am particularly proud that Quicksand has received the award.

My warmest thanks to the members of the jury whose expert knowledge and passion helps Nordic Noir travel far. I also want to thank my publisher Suzanne Baboneau, and it is a special honour to share the prize with my excellent translator Rachel Willson-Broyles.” 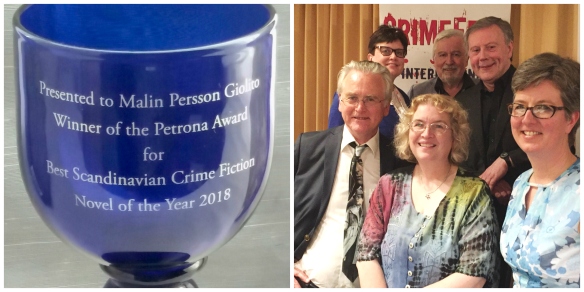 The judges’ statement on QUICKSAND:

“In a strong year for entries to the Petrona Award, the judges were impressed by Quicksand’s nuanced approach to the subject of school shootings and the motives that lie behind them. Persson Giolito refuses to fall back on cliché, expertly drawing readers into the teenage world of Maja Norberg, who faces trial for her involvement in the killings of a teacher and fellow classmates. The court scenes, often tricky to make both realistic and compelling, are deftly written, inviting readers to consider not just the truth of Maja’s role, but the influence of class, parenting and misplaced loyalty in shaping the tragedy. Rachel Willson-Broyles’s excellent translation perfectly captures Maja’s voice – by turns vulnerable and defiant – as she struggles to deal with events. Gripping and thought-provoking, Quicksand is an outstanding Scandinavian crime novel and the highly worthy winner of the 2018 Petrona Award.”

The Petrona team would like to thank our sponsor, David Hicks, for his generous continued support.