Thomas Enger’s Cursed, translated from Norwegian by Kari Dickson, has just been published by Orenda Books, with a rather beautiful cover that references the opening scene of the novel.

First line: Daniel Schyman knew that people would talk about this day.

Cursed is the fourth in the ‘Henning Juul’ series, and focuses on two complex cases: a traumatic, unresolved arson attack on Juul’s flat, and the disappearance of Nora’s old college friend Hedda Hellberg, who tells her husband that she’s going on a retreat in Italy, and promptly vanishes into thin air. And then there’s the murder of an elderly Swedish man on the first day of the hunting season, which might be related, though no one can quite figure out how.

On a narrative level, Enger manages to have his cake and eat it too. Juul’s investigation into the fire is an action-packed thriller that sees him venturing into Oslo’s murky underworld in search of information, with a particularly memorable fight-club scene. By contrast, Nora’s investigation into Hedda’s disappearance and her secret life provides a more traditional crime narrative, with Nora interviewing various members of the missing woman’s family in the course of her journalistic duties, and edging slowly towards the truth. Enger interweaves these two narrative threads with great flair: the novel is expertly plotted, with the thriller/crime elements providing stylistic variety and depth.

I particularly liked that Henning’s and Nora’s storylines are given equal weight. Both journalists are shown to be resourceful and effective investigators, and their characterisation is nuanced and believable. Once a couple, but driven apart by the fatal consequences of the fire, they are nonetheless still linked by that tragedy, and the evolution of their relationship against the backdrop of their ongoing grief is one of the novel’s key strengths.

Could readers new to the series jump in here? I’d read just one of the earlier novels prior to Cursed and managed perfectly well. But some might prefer to read the novels in order, in which case you could start with Burned (Faber & Faber).

All in all, Cursed is a very enjoyable and satisfying read. And as is so often the case with Orenda, the book is a beautiful object in its own right – gorgeous cover, high-quality paper and lovely design details. If you’re a crime lover who rejoices in the aesthetic delights of *real* books, then Orenda is most definitely for you. 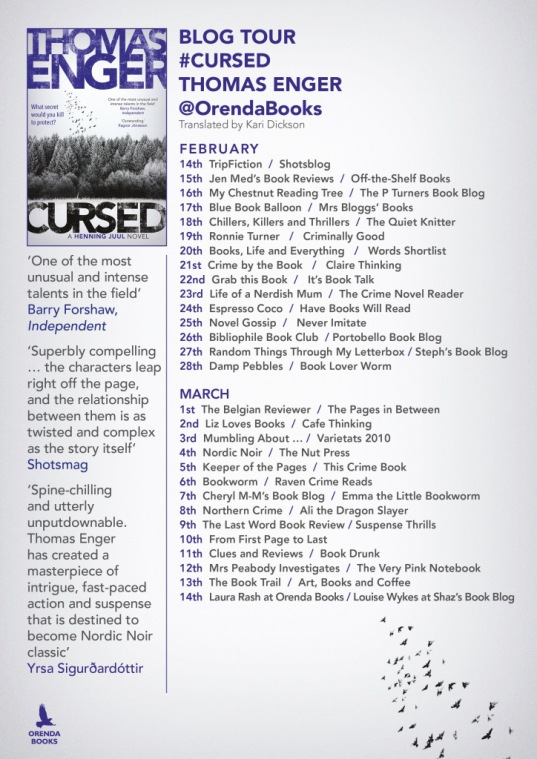