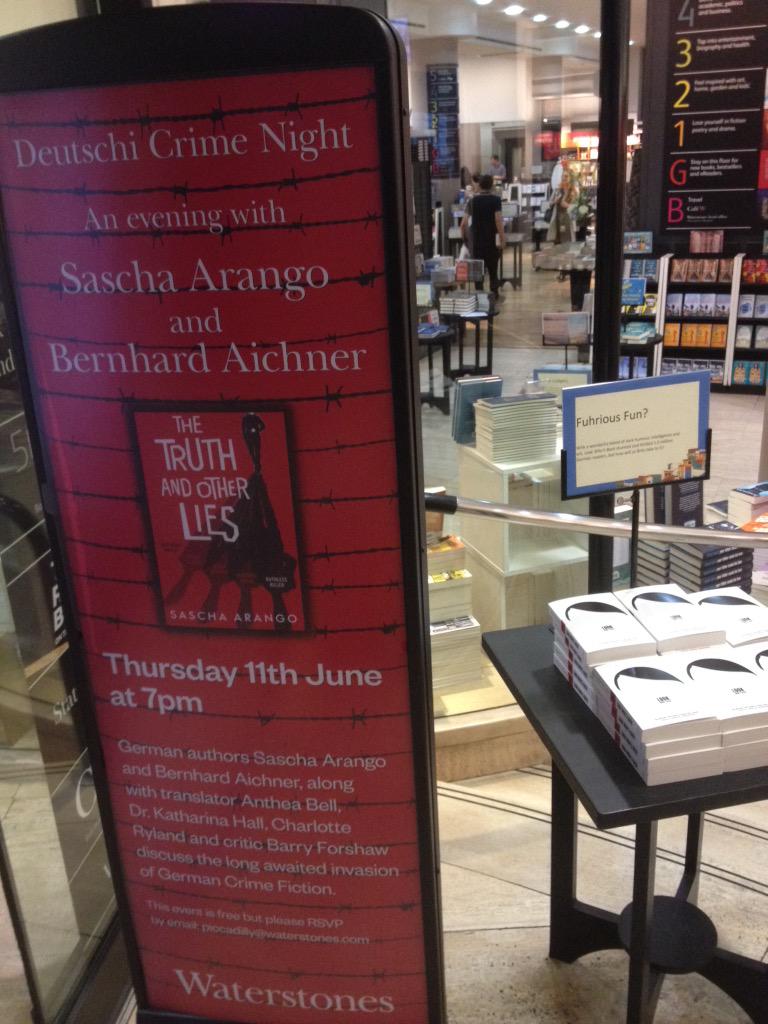 The discussion was wide-ranging and fascinating, and included the following: Sascha on his decision to set The Truth and Other Lies in a unidentifiable, universal space (like Nesser’s ‘van Veeteren’ series), in contrast to the regionally rooted writing he does for the Kiel episodes of the German TV crime drama Tatort (Crime Scene), and about the influence of Patricia Highsmith’s Ripley series on his writing; Bernhard on his creation of the ‘lovable serial killer’ Blum and the research he carried out for Woman of the Dead in a funeral home and at autopsies; Anthea on the process of translating the novel, which she really enjoyed, and on translating more generally, which she described as ‘finding the author’s voice’.

In addition, we took a canter through the crime fiction of Germany, Austria and Switzerland, discussing early German-language crime, crime greats from the Weimar period such as Fritz Lang’s M, Nazi crime fiction, Austrian crime fiction’s use of satire, Swiss writer Friedrich Dürrenmatt’s complex detective figures, and the boom in historical crime fiction since the fall of the Berlin Wall in 1989 (I drew on the forthcoming Crime Fiction in German volume when making my contribution to this portion of the discussion, of which more below). Charlotte filled us in on the work of New Books in German and some crime fiction coming our way soon, including the beguilingly entitled Der nasse Fisch (The Wet Fish) by Volker Kutscher and Melanie Raabe’s Die Falle (The Trap). She also helped us ponder the question of why German-language crime hasn’t quite had the breakthrough it deserves in the UK, with a publisher in the audience adding that she was confident it has the capacity to do so. A good boost would be provided by some German-language crime in the BBC4 Saturday crime slot…

Barry also kindly gave me the opportunity to talk about the Crime Fiction in German volume, which is out in March 2016 and will provide the first comprehensive overview in English of German-language crime from its origins in the 1800s to the present day. I’ve set up a tab about the volume here, and you can see further details on the University of Wales Press website. The volume is part of the UWP ‘European Crime Fictions‘ series, which already contains volumes on French, Italian, Iberian and Scandi crime.

The cover for the Crime Fiction in German volume has just been finalised and looks gorgeous. I love the psychedelic green (Schwarzwald on speed?) and the lashings of blood. And just look at those clever little bullet holes.

Finally, as a few people from our lovely audience were asking for reading recommendations after the event, here are some past ‘Mrs. Peabody Investigates’ posts about German-language crime: