Jørn Lier Horst’s The Caveman is published today by Sandstone Press. The ninth in the Norwegian William Wisting police series, the novel begins with the discovery of a four-month-old corpse in an armchair just down the road from Wisting’s home. While both the policeman and his journalist daughter Line are troubled by their neighbour’s lonely death, they have no idea where this harmless-looking case will lead…

If you’ve not yet read any of the prize-winning Wisting series, now’s a good time to start. These novels are top-notch Norwegian/Scandi crime, which, thanks to their author’s background in policing, provide genuine insights into investigative procedure and are utterly gripping throughout. Four in the series have been translated so far: Dregs, Closed for Winter, The Hunting Dogs, and now The Caveman. I reckon you can pretty much dive in anywhere, as they all read well as standalones – and in fact the first to be published in English (Dregs) is the sixth in the original series.

To mark The Caveman‘s publication, Jørn Lier Horst kindly agreed to an interview with Mrs. Peabody. Read on for some great insights into the Wisting series, how Jørn writes his books, and the crime writers who inspire him. 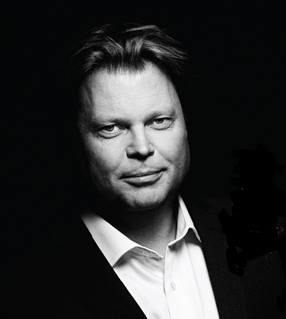 1. Jørn, you were a policeman for around twenty years until 2013. How have your policing experiences informed your crime writing?

JLH: I have extensive experience in various types of police work. For ten years, I was a Senior Investigating Officer, the leading investigator in serious and complex cases. That professional background is my great strength as a crime writer. Police service is an excellent vantage point for observing society, as well as an excellent starting point for writing realistic crime fiction. Sooner or later, the ineffective aspects of our society end up on the police’s plate.

As a detective, I have spent many hours close to multiple murderers, rapists and robbers, and been completely inside their heads. These experiences, the insights into why criminals do what they do, are deeply valuable to me as a writer, but have also taught me a lot about being a human. It can be difficult to understand, but in almost all people, even criminals who have committed atrocities and created despair and destruction, there is something good. I use the word ‘good’ for lack of a better one, but something human one might say. As investigator and author my interest has always been in the duality.

2. You’re good at showing the uncertainty police investigators face when solving crimes. In The Hunting Dogs, you have Chief Inspector Wisting compare his case to ‘an unfinished work of art: a landscape already in its frame, the main features in place, but the details missing. For the moment, the outline was so indistinct he could not imagine how it would look when it was complete’. How important is it to you to reflect the difficulties and complexities of policing in your work?

JLH: The classic fictional police detective is a man with major issues: he drinks too much, feels misunderstood, has strained relationships with women, but resolves the cases completely on his own, often risking his life and breaking the law. This is far from reality. What I try to show in my books is how detective work is a collective task. Several investigators contribute with their different qualifications, knowledge and abilities, but they have a continual, nagging doubt. Uncertainty that they have done the right thing, or overlooked something. I know that troubling feeling well.

3. The other investigative figure in the Wisting series is William’s daughter Line, who works as a journalist. Could you tell us a little about their investigative partnership and Line’s contribution to the crime narrative?

JLH: Those who follow the William Wisting books also become acquainted with his daughter Line, who at first worked as an apprentice in a local newspaper and now works as a crime reporter in Norway’s largest newspaper, VG (Verdens Gang). Their professional paths occasionally cross when both are dealing with the same case, but duty of confidentiality (for Wisting) and protection of sources (for Line) means they cannot talk. This creates an exciting father-daughter relationship and not only gives greater depth to Wisting’s character but also a more complete look at the crime. Line has developed into a good sparring partner for Wisting and, by now, a traditional sidekick.

The police environment has been easy for me to describe, but as Line demands more space in the books, the press environment has become more important. In my job I met many crime reporters, but I have been concerned that the presentation of their role should be as accurate as that of the police. While researching The Hunting Dogs I interviewed the VG editorial staff and so got close to some of the country’s leading crime journalists, just to get the authenticity right.

4. When did you start writing and why?

JLH: I never had a youthful dream of becoming either a cop or a writer, but ended up being both. The fact is, I always loved to write, and remember as a little boy, when a radio play left a cliffhanger ending, sitting down and writing the sequel myself instead of waiting for the next episode.

I also remember starting what eventually became my debut. It was late autumn of 2001 and I was home in bed, finishing a Norwegian crime novel. I threw it against the wall and told my wife that I could do better myself. She told me I should go ahead in that case. Half an hour later I got up and made a start.

5. How much crime fiction do you read?

JLH: Probably around 25 books in a year, mostly Scandinavian writers but also police procedurals from all over the world.

6. Are there crime authors (or simply authors) who inspire you?

JLH: No favorite, but I would probably not have been the writer I am without Henning Mankell, and probably not the same cop. My first encounter was the first Kurt Wallander novel, Faceless Killers, published in Norwegian in 1993. I read it at the Police Academy thinking that here was the kind of policeman I wanted be: an upright and good detective and a leader. Mankell / Wallander inspired both my careers.

7. The Caveman opens with the discovery of a corpse that has ‘been sitting dead in front of his television set for four months’, highlighting the isolated position of some individuals in society. Is it important to you that your crime novels have a social dimension?

JLH: I like to think about my novels as more than crime fiction. They reflect the reality we live in: a society that is becoming colder, tougher and more violent. William Wisting reflects on how that affects us all.

In my books the offenders are always caught, the crime is solved, but the social structures and problems that created the criminal remain. I try to draw attention to a social system that makes promises about protection and inclusion, but still fails many of its citizens. At the same time, of course, I try to tell an exciting and compelling story.

8. Your novels are set in the town of Larvik and Vestfold county on the south-west coast of Norway. What makes this area a good setting for a crime series in your view (aside from the fact that you live there…)?

JLH: The numerous Nordic small towns presented as scenes of literary murders do not provide obvious settings for crime stories. The beautiful scenery inspires picturesque, enticing descriptions of nature, but the attraction of the story lies in the contrast with the brutal violent action.

9. The plotting of your novels is expert and intricate. Do you have all aspects of the narrative worked out in advance of writing? I’m imagining some fabulous wall-charts above your desk as you work.

JLH: I have to disappoint you when it comes to the wall-chart. I travel a lot and have an electronic version on my computer. This probably sounds strange, but I actually write my books in Excel before I write in Word. I use the spreadsheet to plot and sketch the stories. Each column is a chapter, and in the cells I write keywords for the action. I have rows which track time and place and help all the little cogs in a crime novel fit into place. This analytical approach is another trait I have brought with me from investigations, but things happen during the writing process. The story goes in directions other than I had planned, and up pop new people. In this way the stories become alive.

10. A fun one to finish with! If you could have dinner with any character from literature, TV or film, who would it be and why?

JLH: Oh, let us keep a large company! If I have to choose one, it must be Inspector Maigret, since both he and Georges Simenon’s writing have had such a great influence on all subsequent crime literature. I stand tall on his and Mankell’s shoulders and owe them a big thank you – and a finer dinner.