The last couple of weeks have been busy, so it was only last night I realised that a bit of a gem is currently being shown in the BBC4 Saturday night crime slot.

The Code is a six-part Australian political thriller, which begins with the mysterious death of Aboriginal teenager Sheyna Smith in Lindara, a remote New South Wales township. For reasons that are unclear, the circumstances of her death have to be hushed up, so when Ned Banks (a journalist for an internet newspaper) and his brother Jesse (an internet hacker on the autistic spectrum) start to investigate, trouble comes a-calling. Back in Lindara, Sheyna’s schoolteacher Alex Wisham gets pulled into the case in unexpected ways. 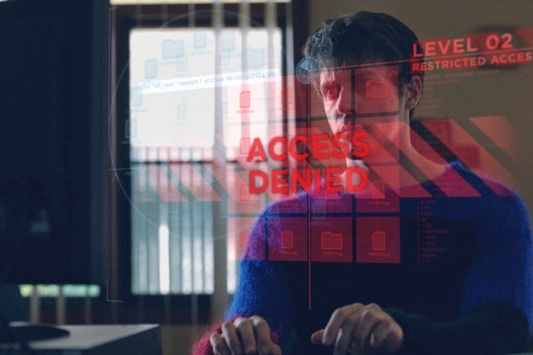 Jesse does stuff that he most probably shouldn’t do

I caught up with the first episode this evening, and very much liked what I saw. The plot is gripping, the characterisation is excellent, and the production is sleek and stylish, with wonderful shots of the Australian outback calling to mind New Zealand’s Top of the Lake. By coincidence, the character of Ian Bradley is played by David Wenham, who also appeared in Top of the Lake, and there’s another well-known face in Lucy Lawless (Xena; Spartacus; Battlestar Galactica) as Alex Wisham. Dan Spielman and Ashley Zukerman create a very nice dynamic as brothers Ned and Jesse.

Shades of Top of the Lake (wide open spaces hiding secrets and lies), The Bridge (young Jesse) and Sherlock (the neat use of graphics) – what’s not to like?

There’s an article exploring the drama with its creator Shelley Birse over in The Guardian (some spoilers). Note also the irony of an Australian political thriller being partially funded by the Australian government!

There’s a BBC guide to the characters and cast here.

24 thoughts on “Catching up with Australian political thriller The Code”