The Guardian on Monday carried extensive coverage of the post-election turmoil in Greece: the break-up of the latest coalition talks between the three main parties, the risk of continued financial collapse, and a possible exit from the Euro.

In the middle of a double-page spread on the crisis, next to an article entitled ‘Greek party leaders round on left-wing radical as talks fail’ and beneath a picture of Syriza leader Alexis Tsipras, was a prominent piece by Julian Borger on the crime writer Petros Markaris, who is currently working on the final novel of (what I’m dubbing) his ‘Greek Tragedy’ trilogy. 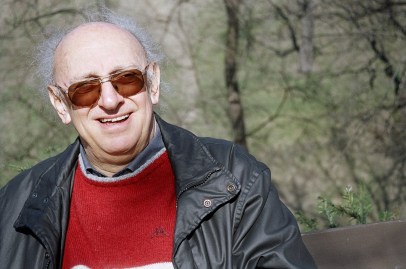 The first two novels in the trilogy, Expiring Loans (2010) and The Settlement (2011 or 2012), explore Greece’s recent financial and social collapse. They are proving hugely resonant with readers, not least because there is a strong element of judicial catharsis woven into the narrative: the murder victims in Expiring Loans are players in the financial sector, while The Settlement features the self-styled ‘National Tax Collector’, who poisons wealthy, tax-evading Greeks with hemlock. Mindful that temperatures are running high, the backcover of the latter carries the sober instruction: ‘this novel is not to be imitated’. 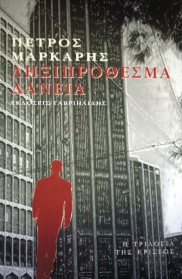 There are a couple of particularly interesting assertions made in the Borger article, ‘Crime writer Petros Markaris channels Greek rage into fiction’:

I wonder what Markaris’ starting point was? Was he a social commentator who consciously selected crime fiction as a vehicle to communicate his views to a mass readership, or did he begin as a crime writer and then develop his role as a social commentator via his work? Either way, the fact that a crime writer has become such an influential and authoritative voice on the Greek crisis is fascinating.

These statements underscore the important role that crime fiction can play in highlighting and dissecting larger ‘social crimes’ such as state corruption, and its impact on ordinary people (The Settlement opens with the suicides of four elderly women unable to cope on a reduced state pension). One might add that crime novels are particularly well placed to provide these kinds of timely social analyses, because they tend to be written and published more quickly than their ‘literary’ cousins. They also reach a significantly wider readership than ‘literary’ novels, which gives them a greater chance of feeding into current public debate.

Markaris’ status as a social commentator is undoubtedly exceptional, due to the extraordinary political and social contexts in which he is writing, but his presence in a British broadsheet, amidst the news and political analysis of the day, is an intriguing illustration of the influence that crime writers and their crime fiction can have in wider national and international contexts.

Expiring Loans and The Settlement both feature Athenian police inspector Costas Haritos. Unfortunately, neither novel has been translated into English as yet (please hurry, dear publishers!), but previous Haritos novels, such as Che Committed Suicide, are already out. A review of Basic Shareholder, apparently due soon, is available on The Game’s Afoot.

For examples of Markaris in action as a social commentator, see his interview (in English) with the German magazine Der Spiegel and the translation of his piece ‘The Lights are going out in Athens’ on the ‘Breach of Close’ blog (which originally appeared in German newspaper Die Zeit).